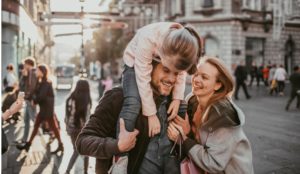 According to a recent study done by the National Association of REALTORS®, smaller cities like Madison, Wisc., are gaining popularity among millennial families. Whereas parents with small kids used to focus home searches on the ‘burbs, cities are now also an attractive option. Here’s why:

New moms and dads don’t have to struggle to get babies and toddlers in and out of cars. Anyone who has ever wrestled a tantrum-throwing 2-year-old into a car seat knows how nice it is to be able to pop a child into a stroller for errands by foot.

Whereas in some suburbs friends might live a lengthy drive away, in cities, you’re usually within a few blocks of at least a couple of playmates for your children. The ease this allows is particularly desirable for stay-at-home moms or families with nannies (as opposed to those with kids in daycare).

Cities that are home to universities have an abundance of available babysitters, some of whom are probably studying early childhood education.

From museums to classes to zoos, the problem can be narrowing down what to do with the kids—not finding something to get you out of a boredom rut.

Yes, you sometimes give up the privacy of a backyard by living in a city. But for some buyers, a large park is a win over a small backyard—especially if taking care of a yard isn’t how they want to spend their time.

In the ‘burbs, you generally need two cars, but in a city, you might not need a car at all. Added bonus? No worries about driving home after having a glass or two of wine on a parents’ night out.

Everything, from food to formula to diapers, can be delivered quickly in a city. This is also true in some suburbs, but not in more rural areas.

Some of the best hospitals in the world are located in cities and/or university towns. Anyone with a child who needs a world-class doctor will appreciate this.

You can pop out of the office to see your kids during the day or take them to the doctor when needed, without having to take the day off work.
The city is all about convenience and culture, and families buying homes are recognizing this!